If this is your first visit and you'd like to start from the very beginning then click on the September link under Blog Archive on the right or simply click here but please be aware that my first post is a lengthy account of the past 12 months and may require a good bottle of red wine to accompany it's reading!!

In the meantime here is my third post which will cover my fishing exploits during the month of November 2011......enjoy.

Today I had my first taste of piking and although I didn't catch I had a great day and thoroughly enjoyed myself. Fortunately my mate whom I've now named Andy Pikey showed me how it was done and caught a nice jack pike of around 5lb.

It was a 4:30am and an early start, once the car was packed I was off to meet Andy at a not so well known Cheshire mere. We met at 6:30am and headed for the boat house to get the boat ready for our trip. 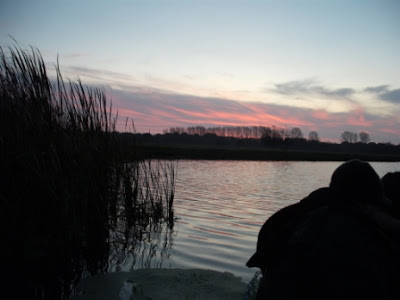 Emerging from the reeds just as dawn was breaking and the scenery was breath taking. 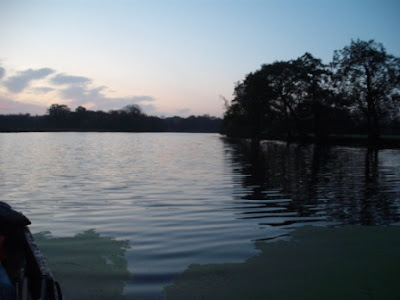 The first part of the mere is no more than 3ft deep but because Andy had done his homework we soon had a couple of dead baits lobbed into a deep channel which we hoped was where Mr Pike would be waiting.

A couple of hours passed so we 'upt anchor' and moved to another pikey looking area. With the baits recast we started exploring the vast water with the lure rods. It wasn't long before Andy shouted "I'm in" and I grabbed the net. 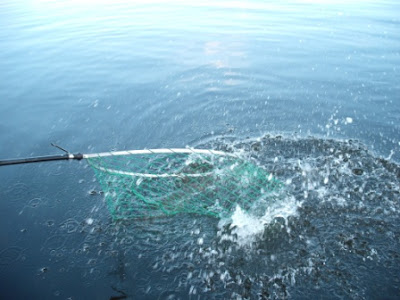 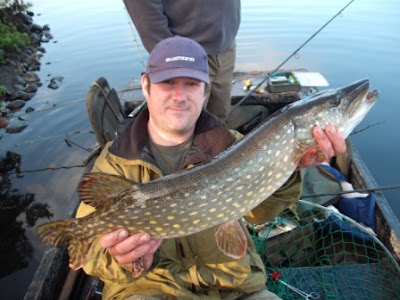 We moved around and tried different spots but no more pike graced the net. That didn't matter to me because it was my first time piking as well as my first time fishing from a boat and I realised how that opens up the whole water to an angler, you couldn't have cast to some of the places we explored and it felt like we were more in touch with our surroundings. 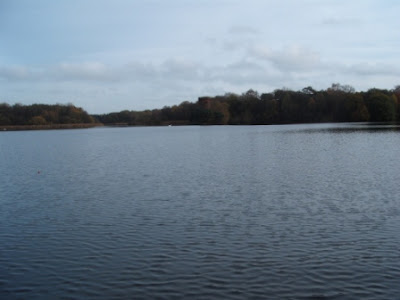 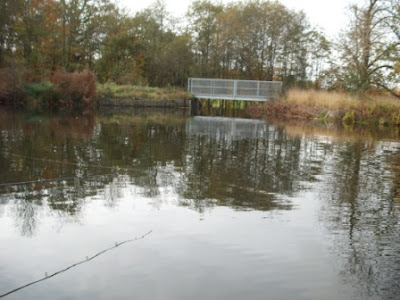 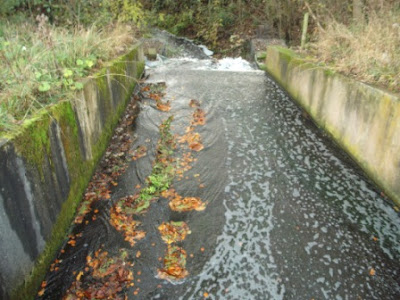 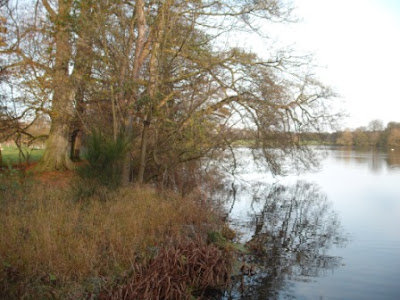 Eventually time over took us and we returned to the boat house, tired but already planning the next trip. I had a great day and thanks to Andy Pikey for organising the boat and giving me a great introduction to the prolific Esox Lucius. 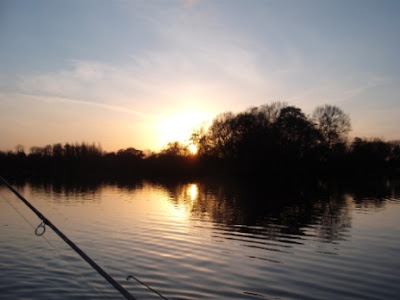 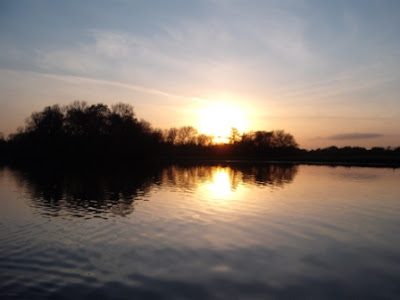 Sunset on a Cheshire mere, it doesn't get much better than this!!!

I'm already planning for our next trip and also hoping to get some chubbin going on the rivers so I'll come back soon with an update.

Where has November gone? I had planned a few more trips but I've been pre-occupied doing a few DIY jobs on the Passat so I've not managed to get out on the banks as much as I'd have liked to.

Mr Ward had suggested a days Perch fishing at a local commercial but a match day put laid to those plans and a quick re-think led to Andy Pikey and myself heading off to the River Dane at Saltersford to try out our new centre pin reels, mine was a birthday present (to myself) back in September and it didn't yet have any line loaded on it.

We had both bought the Marco Cortesi Signature Centre Pin for £36 delivered and Andy had done a quick review on the club forum sometime ago which prompted me to buy one. Mr Ward had also purchased one and had used it to great effect on our trips to the Ribble whilst doing his Mr Crabtree impersonation.

I was unsure how to load the line so I eventually wound on 75m of mono which proved to be a mistake as it was back to front but on the day we re-spooled with the braid and that made life much easier when learning to cast on a windy day!!

We met at Saltersford farm at 11am, our target species was a Grayling as neither of us had caught one before. We headed off for the upstream limit, the plan was to access the river here and wade downstream getting up onto the bank where possible. After a 10 minute walk across a couple of fields (avoiding the rather aggressive looking bull!!) we reached the upstream limit.

I had purposely lightened my tackle but still had too much crammed into my bait and bits bag and it was fairly heavy plus I had too many layers on so was sweating like an unfit pig and needed a hard earned rest whilst we assembled the tackle ready for our first trot.

Andy summed up the frustrations of trying to negotiate a tree lined river bank with a 13 foot float rod and a centre pin reel loaded with very fine mono, he said and I quote;

"The day started slow and if we were not on the water I'm sure we would have started to get frustrated but this was eased by a few ciggies and cups of tea. A few noteworthy points about pin fishing here with long 13 foot rods that manage to catch every low tree/ branch/ fence/ bramble/ stump etc etc
Anyway despite all of the above we pressed on and actually managed to start fishing. It was very much a hit and miss affair and our tactics where by now means refined but on my first trot down I was in albeit a yet to be identified tiny little fish who had taken double maggot on a size 16 fair and squarely in the top lip.

I've had a quick Google and rekon this was the little fella that was takin our bait, still it meant neither of us would blank!!

Bigeye Chub (Notropis amblops) a member of the Minnow family...

OK it was a Minnow but it was proof of concept and I'd have been worried if nothing had shown an interest.

Andy moved about 30 yards downstream and within 20 minutes had his first Grayling on the bank, I rushed over with the camera and captured the moment, we where both delighted. 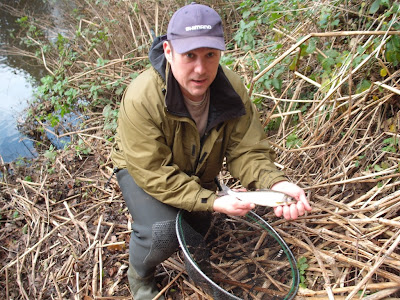 Andy with the first Grayling of the day... 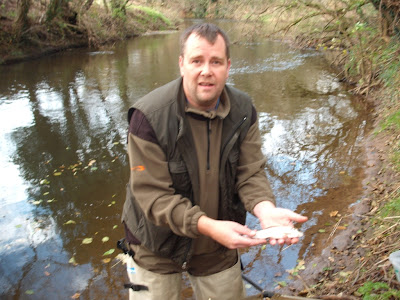 Followed by my small but perfectly formed example... 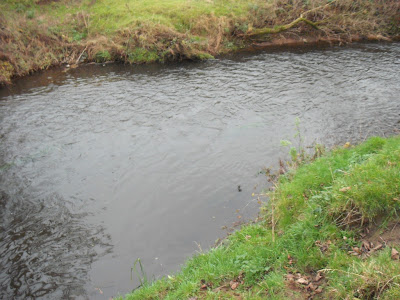 Tried bread flake here for chub but to no avail... 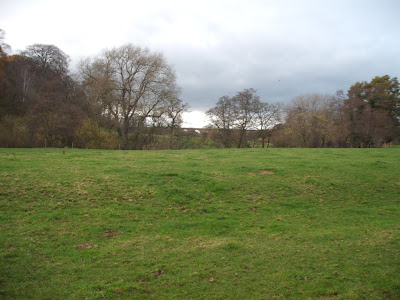 So headed across the field, too many swims to choose from!!! 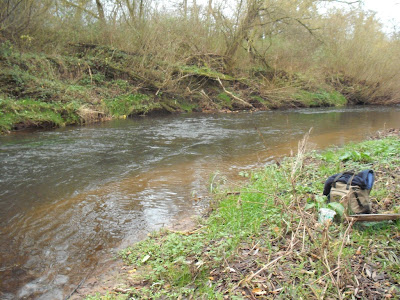 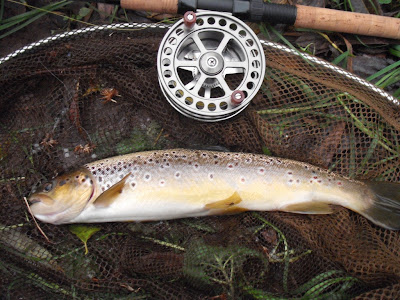 And look what took double maggot, my first brownie and a bonus fish...

Andy had another Grayling around the same size as his first after battling through the minnows but it was 4pm and dusk so we headed back to the farm and reflected on our first attempt at trotting on the centre pin.

It was 4:30pm and dark as I left Saltersford but it was too early to head home so I headed for Daisybank armed with a barbel rod and a tub of pellets. There where two other cars parked up so I didn't head for my favourite swim downstream instead I settled into swim at the bottom of the hill at 5pm.

It was a fast flowing swim with an overhanging tree and I fancied my chances as I baited up with pellet and a few balls of ground bait. I cast the 3oz feeder downstream and towards the opposite bank and settled down with a cup of coffee.

Within five minutes the reel screamed off and I lifted into my first barbel but sadly it didn't take and I reeled in empty handed. I should have moved swims at that point but instead I stuck it out till 9pm, I'd had a few knocks probably from a chub but eventually I made my way back to the car and headed home.

It had been a great day and I'm definitely going to return for short sessions on the pin once the winter really kicks in, I'd learn't a great deal and was really glad to have tried out this method of river fishing, the roving approach on light tackle is key to an enjoyable days sport and although I'll always pack a barbel rod 'just in case' I think there is more than enough rivers and species to target during the next couple of months.

That's it for November now and I'll start a new post for next month starting with a trip to Wrinehill for Perch in a couple of weeks, until then...